The Employment (Miscellaneous Provisions) Act 2018 has been enacted and has been described as one of the most significant pieces of employment legislation in a generation. Undoubtedly, it will be significant for employees in sectors such as retail and hospitality.

It aims to provide more stable employment for employees who currently have uncertain working conditions. This update is a general overview of the tools designed to achieve this, being: banning zero hour contracts except in exceptional cases; banded hours; a new concise list of the contractual information to be provided promptly to new recruits; and stronger penalties (including criminal sanctions) for non-compliant employers.

The Act has now been signed by the President and will be operational within the next few months.

The industries that will be most affected by the changes include the retail, food and hospitality industries and therefore employers in these industries must start preparing now.

Action required by employers:- Affected employers should audit their current contracts of employment for casual workers and determine whether or not they can justify continued use of zero hours contracts.

Comments on the proposal:- Concerns have been voiced regarding the increased payments and the possibility that this may lead to redundancies.

There are eight bands generally increasing in increments of 5 hours: 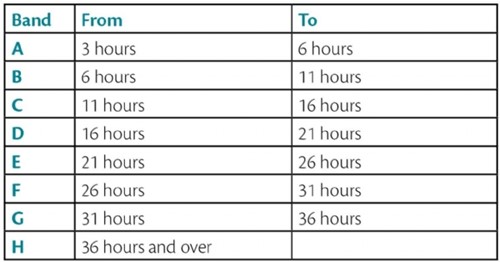 Action required by employer:- Employers should review the relevant contracts and plan to accurately reflect working hours and prepare for banding arrangements. Where an employee has been placed in a particular band, an employer will need to carry out periodic reviews to ensure that the employee is working an average of those banded hours for the 12 month period.

Comment on the proposal:- There is little recognition of flexibility or variation during the 12 month banding arrangement.

Although employees will be entitled to make a complaint to the Workplace Relations Commission where the banded hours provision is breached, adjudicators will not have the power to award compensation. Instead adjudicators will have the power to order an employer to comply with the banded hours provisions. Some employers may therefore be reactive to the new rules, although our view is that such an approach would add strain to employee relations. However, if an employee is penalised for invoking their rights, compensation can be ordered.

In addition to pre-existing obligations, employers must provide new recruits with a statement of the following core terms of employment and do so within five days of commencement:

There is a new offence of failing, without reasonable cause, to provide that statement or of deliberately or recklessly providing false or misleading information leading to potential fines of up to €5,000 and / or up to 12 months imprisonment.

Management can become personally liable in circumstances where an offence was committed with "consent or connivance". There is a defence of having exercised due diligence and taken reasonable precautions.

Action required by employer:- Employers must get ready to implement this variation to their recruitment procedures.

Comment on the proposal:- It is unclear what action is necessary to demonstrate that a manager took reasonable precautions and managers would justifiably be concerned.

The Act has received a mixed reception. While it is designed to reduce supposedly exploitative employment practices, some employees take no issue with flexibility and to the extent that it addresses labour market ills, some amendments are regarded as disproportionately adverse to businesses, particularly smaller operations. Given the significant changes which will be introduced in the next few months, we recommend that employers take pro-active steps now so that they will be well prepared.

Future Changes: What to expect in 2021 - Financial Services

Future Changes: What to expect in 2021

Vicarious liability: Is an employer liable for its employees’ practical jokes?

Whistleblowing: Employment tribunal time limits and the application of the ACAS code of practice when employees make whistleblowing allegations