Mental health services are enduring huge pressures in an increasingly stretched NHS. Reports have revealed shortages of cash, beds and staff, as well as patients being treated miles from home. Mark Gould asks where is the money going and can collaborative working and new technology help?

And as of July last year, 13% of mental health consultant posts were vacant. Indeed, the Royal College of Psychiatrists is calling for child and adolescent psychiatrists to be added to the national shortage occupation list in order to recruit more doctors from abroad. If not, it says the Government’s Children and Young People’s Mental Health Green Paper target of a four-week wait to see a consultant will remain an aspiration.

These gaps in support and provision in the system are reflected in a CQC report, published in January 2018, which raised concern at the rise in detentions under the Mental Health Act. The CQC explained this was influenced by these gaps, including a lack of beds to admit patients voluntarily in the early stages of illness.

Many experts seek the answer through integration – the key to developing effective and efficient mental health services. However, DAC Beachcroft Partner Gill Weatherill suggests this also brings risks, particularly against a backdrop of these funding and resource pressures.

“We are increasingly seeing incidents and deaths in circumstances where there is a lack of understanding or agreement between services regarding organisational responsibility,” says Weatherill. “Coroners are repeatedly using terms such as the ‘jigsaw’ of services and the risk of individuals falling between the ‘cracks’.”

In addition, Weatherill says the outsourcing of services such as drug and alcohol support or counselling to new or non-traditional providers means that patients may have a care pathway that involves input from a myriad providers. “While that can bring benefits it also brings risks and requires clearly thought out governance processes to ensure accountability and safe patient care.”

The problems within the system were highlighted in January in separate reports by the Kings Fund and The Royal College of Psychiatrists, revealing that while mental health funding has increased it still lags behind acute trusts.

The Kings Fund Fellow in Health Policy, Helen Gilburt, revealed that since 2012, funding for mental health trusts has increased by just 5.6% compared with 16.8% for acute hospitals.

Gilburt’s analysis of CQC inspection reports for mental health trusts identified an increased risk of suicide and self-harm as a result of problems with beds and staffing in more than half of trusts. Some trusts highlighted reliance on bank and agency staff, as well as ‘substitution’ of staff, for example healthcare assistants replacing registered nurses.

While the majority of Clinical Commissioning Groups (CCGs) have met their commitments to raise spending on mental health, Gilburt says the overall spending gap between mental health trusts and acute and specialist trusts has widened because national funding has focused on relieving pressure on acute hospitals. “Unless funding grows more quickly, mental health providers may end up implementing improvements to some services at the expense of others.”

Professor Wendy Burn, the President of the Royal College of Psychiatrists, says this is already happening. According to Burn, Health Secretary Jeremy Hunt made much of the extra £575 million spent by CCGs last year compared with the previous financial year. She says CCGs should pass this money on to mental health trusts and other providers to iron out the funding gap.

While spending by commissioners is monitored by NHS England’s mental health statistics ‘Dashboard’, Burn says “there is no regular publication of high-quality data for those other organisations”. The College is calling for comprehensive spending data to be published regularly by all providers of publicly-funded mental health services.

Dr Rajesh Nadkarni, the Medical Director of Northumberland, Tyne and Wear NHS Foundation Trust, a mental health trust providing a wide range of hospital and outpatient services, says it is vital that mental health receives the funding to meet some of the aspirations of the Mental Health Five Year Forward View. “The key themes are all about integration, prevention and early access, to avoid expensive hospitalisation.”

According to Nadkarni, particular attention is being paid to children’s mental health, new mothers, the elderly and people with long-term conditions.

“If we deliver appropriate mental health care in the first year after pregnancy and birth, the outcomes are much better for the mother, the child and society. Likewise, if we deliver timely integrated care (dealing with mental and physical needs) for people with long-term conditions like diabetes or COPD, they are less likely to develop additional physical complications, or other more severe mental health problems, leading to improved quality of life.”

Nadkarni’s Trust was one of the pioneers for Street Triage, an initiative where mental health nurses accompany police officers as they attend to incidents in their local communities. “The scheme has reduced the need for certain detentions under the Mental Health Act, which police would have otherwise used for those suspected of suffering from a mental health issue, and led to more appropriate identification of services for those presenting in crisis to the police – again, it’s all about integration and partnership.”

Logging onto Kooth is simple. First, potential users enter their geographical location to check their CCG is commissioning the service. Users can stay anonymous at the point of entry and only need enter year of birth, ethnicity and gender. They can access an online one-to-one chatroom, live discussion forums and get one-to-one confidential help from a British Association of Counselling and Psychotherapy accredited counsellor or one of the emotional wellbeing practitioners, who can assess levels of need and suggest referral options.

Kooth offers a range of interventions including information and advice through peer-to-peer support, self-help resources, drop-in counselling sessions, regular structured face-to-face or online counselling and therapy, and liaising with other services.

“We aim for a 15-minute wait for a counsellor with a maximum of one hour says Bousfield.

Topics covered on the website include bullying, relationships, self-harm, eating disorders, and a range of topics and issues affecting young people.

Bousfield says there has been a “sea-change in the way digital applications play a role in care”.

“It’s been hard work. We started Kooth off in 2004 with one PCT (Primary Care Trust), and expanded into Cheshire and Merseyside. We build relationships. We are continuously collaborating with local authorities, CCGs, foundation trusts, charities and other organisations to provide an early intervention solution with clear escalation and de-escalation pathways.”

The idea for Kooth was clinically and not technology led and arose from an online therapy service for adult males. “We realised that 35% of the traffic was coming from under-18s,” says Bousfield.

Bousfield hopes that greater integration between health and social care under the umbrella of Accountable Care Organisations will mean they are better placed to look at mental health needs in a strategic way.

She says the focus must remain on health inequalities and understanding more the determinants of poor mental health. But she also feels that just as the e-book has not replaced the printed word, online help “must go hand in hand with good bricks and mortar services”.

As more companies jump on the online or app-based health bandwagon she feels the market will become glutted and that it will need accreditation and regulation to separate those that have been using clinical input, from those that have not.

“You can't have health apps that are developed technically because they can and might make lots of money – instead we need to work with the NHS and ask the question what can we do to make life easier and services more accessible and safe?”

And the name Kooth? “We had all sorts of names and that was the one young people liked. They didn’t want a name with the world counselling in it. It plays on uncouth, it rhymes with youth and it’s an old Scottish word for ‘wise’.”

To discuss the issues raised in this article, please contact Gill Weatherill on 0191 4044045 or gweatherill@dacbeachcroft.com. 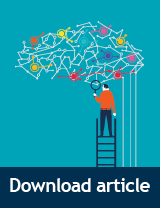