Robert Lee, Head of Residential at DAC Beachcroft, waxes lyrical on the garden village, with a cautionary note for its future.

The village, as a concept, has an enduring appeal; a welcoming green embrace of tranquillity. The reality of struggling schools, poor transport links, slow broadband speeds and closing pubs and stores has somewhat dented the dream. There is though the beginnings of a resurrection of the village idyll, that both respects our heritage and responds to the demands of this century.

Placemaking is a laudable pursuit, but the sociologists' theory can only become reality, when a number of interests align. A single policy or a lone voice of protest isn't enough; but when government, local authority, developer and community collaborate with a shared vision a new way of living can be achieved. There is increasing evidence of this greater connectivity in the form of garden villages.

The Government's pronouncement on garden villages is both encouraging for the developers who have already been pro-active in creating some early twenty first century villages and supportive of local authorities, with advice and financial help.

These garden villages are not just add-ons to existing areas. They are carefully-sited, separate places – for around 1,000 houses - with the emphasis very much on creating a stand-alone community, with strong environmental credentials, for a variety of ages and incomes. They provide their own facilities and infrastructure, without the need for piecemeal developments that can erode the character of existing settlements.  Working with the vernacular, responsible developers are creating landscapes that merge with the local area and researching local archives for traditional street plans and references. These developers, acutely aware of their role as stewards, need to find a route for sustainable management that endures beyond construction.

Local people will have helped shape the new village; it will be the residents who will help maintain what has been promised and Community Interest Companies (CICs) are a means of achieving this. Set up to manage all the communal assets on the site – schools, shops, surgeries for example - these CICs, the modern equivalent of the village council, have the future of the new community in their hands. The garden village is a perfectly formed, albeit small, answer to our housing shortage. It is a response that seeks to mix the past and present. It needs the involvement of an active CIC to give these new communities a beating heart and a future. The garden villages will need the continued support of all involved parties to ensure that the residents get what they need to make their new home a success and avoid the fate of many a traditional village. 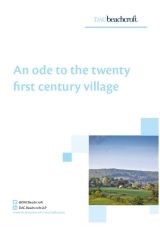