In the 56 years since the 1962 Hospital Plan for England, NHS infrastructure has hardly changed, despite the shifting political and social landscape.

In the past couple of years – especially with the impetus of the Five Year Forward View – the Government has commissioned successive investigations to see how the estate can be evolved; and indeed how these changes can potentially generate both revenue and useful social purpose. The most recent, produced by Sir Robert Naylor and published in March 2017, received its response from the Department of Health and Social Care this January. But what does this mean in practice?

The Naylor report set out to develop a new NHS estate strategy supporting the delivery of specific Department of Health and Social Care (DHSC) targets to release £2 billion of assets for reinvestment, and to deliver land for 26,000 new homes. It makes 17 recommendations falling into three categories:

The Government response to the Naylor report, published in January 2018, sets out its own detailed programme of actions (see box), to be overseen by a new NHS Property Board.  One key principle is allowing NHS organisations to retain receipts from land sales, as long as they are reinvested in the NHS estate to deliver local priorities and Sustainability and Transformation Plan (STP) strategies. There will be support for the NHS in developing its surplus land for homes for its own staff as well as housing for sale, and to realise £3.3 billion of additional capital from the disposal of surplus land, holding trusts to account against locally developed and agreed targets.

One of the key debates arising from these new developments is how organisations can be incentivised and enabled to work together, explains DAC Beachcroft partner Anne Crofts. “We’re looking at how best to bring together public sector organisations to optimise the value of their estates, whether for new housing projects, new community facilities for health and social care, or other similar uses.”

Crofts continues: “One of the issues we are looking at is how closely different bodies can come together to create new entities, for instance, limited liability partnerships, to create the vehicles that can optimise the development of assets or indeed third-party investment. Even in the NHS not all organisations have the legal powers to make such investment. That can mean you have to fall back onto contractual arrangements, and the governance of those can become unwieldy. Local authorities are further down the line in terms of these deals and have more of a track record. Therefore one possibility is to bring local authorities, private sector and NHS organisations together to tackle the political and legal issues involved.”

One of the most urgent questions – especially in London – is whether the plans will also result in affordable housing for NHS employees. The intention is that in those areas where affordable housing can be developed, NHS staff should be offered a right of first refusal.

However, not everyone is convinced that this will achieve the intended result. The New Economics Foundation warned, in a report also published this January, that four out of five such homes will be out of reach of a nurse on an average salary. In London, across all areas, none of the homes for sale will be affordable to NHS key workers, including nurses and midwives. The NHS Confederation has also argued against the Naylor and Government proposals, suggesting that instead of private development, land should be released using seed money from the NHS Homes Fund, which could also be used to fund other developments.

“There’s also public debate as to what amounts to privatisation and what doesn’t,” says Crofts. “We’re acting for a number of NHS trusts that have set up their own subsidiaries to provide estates and facilities services. That’s known as insourcing (setting up their own vehicles through which to provide the service); it gives some commercial flexibilities, but remains wholly owned by the NHS parent. There is some public consternation about this as being a ‘first step to privatisation’ but the intention is generally to establish a vehicle that enables greater commercial efficiencies while remaining within the NHS, with appropriate governance and controls, and in a context where everyone is demanded to make efficiencies.

These are also potentially appropriate vehicles for greater collaboration between public sector organisations at scale. The alternative is often seen as complete outsourcing of the service to the private sector; is this a more appropriate middle ground?”

Wider collaboration in the public sector also poses some challenges, Crofts adds. “There are some legal hurdles. Local authorities and NHS bodies still operate under separate legislative regimes. The Government Response to Naylor has confirmed that NHS trusts will be able to benefit from  sales of surplus land (Foundation Trusts are legally entitled to retain proceeds), and these can be reinvested in line with STP plans but, so far, there’s very little detail as to how this is to be applied in practice. What does that look like, if the trusts who are disposing of this land are not going to benefit directly? How will that be applied? There is still a lot of detail to be worked out and we need to see individual STP plans.”

Crofts points to the loss of contract management and commercial management skills, especially with the fragmentation of structures over the past ten years, a skills gap that is also highlighted in the Naylor Report and the Government Response. “We no longer have strategic health authorities, CCGs are quite small, and commissioning and provision are now separate. Estates strategy and skill sets are similarly fragmented. The Report points to plans to make resources available, but it has to be acknowledged that there has been this loss that may take time to redress.”

Crofts concludes that part of the solution is probably to work across the different boundaries dividing the sectors, and within those sectors, different types of organisation. “It could be that creating these new vehicles, which help collaboration and coordination, acts as a catalyst for developing new centres of excellence.” 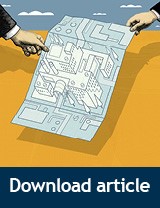