The NHS is sitting on an untapped goldmine of unused land worth around £2.7 billion. But how should this valuable resource be used most effectively?

In these financially stretched times for the NHS, it may seem incredible that it is sitting on unused estates worth an estimated £2.7 billion.

Currently, the NHS in England has an estimated 1,200 sites, 6,500 hectares of land, and buildings with a gross internal area of 26 million square metres.

Most people would view such a resource as an untapped goldmine, but the reality is that there has been little government guidance on how this land could and should be used, and trusts are not incentivised to do anything with it.

However, this could be about to change, following a government commissioned report published in March from Sir Robert Naylor, the Government’s National Adviser on NHS Property And Estates.

The report builds on an earlier review this year by Lord Carter. It recommended the health service introduce efficient use of resources, including estates, to contribute to £5 billion savings over the next five years.

Naylor says: “There is a very substantial amount of land and property that isn’t being used, or is being used badly and could be used better

He insists his ideas are not about selling off the NHS, arguing: “It’s about modernising the NHS, improving facilities for patients, and making better use of the huge number of buildings and facilities that the NHS has – not just in hospitals but also in primary care.”

Naylor calculated that the NHS could release estates no longer required to deliver health and care services worth a risk-adjusted value of £2.7 billion.

Even better, the financial value could be much higher, as Naylor says: “If you acted in a more commercial way than the NHS normally does, then the actual value of disposing of the land could be as high as £6 billion.”

The report claims that for STPs to be able to deliver NHS England’s Five Year Forward View strategy, current capital investment to fund transformation and maintain the current estate will need to increase by around £10 billion. This would need to be funded through NHS property disposals, private capital (for primary care) and the Treasury.

Anne Crofts, Partner and Head of Commercial Health at DAC Beachcroft, agrees that there is huge potential for improvement in how trusts use their assets.

Crofts says: “Historically, trusts that own properties have treated them like the family silver. They see them as assets to be kept safe for a rainy day, but it’s not always entirely straightforward to dispose of the assets.”

The scale of opportunities varies across the country, as Anne Batanero, Partner and Head of Health Real Estate at DAC Beachcroft, explains:

“There is a distinction to be drawn between properties in the south and south-east, where values are quite high, and surplus property in the north and more disadvantaged areas where values haven’t increased as much.

“What’s left is the stuff that is quite difficult – that’s why it hasn’t been sold – because it is complex. There are surrounding properties which may or may not be health properties and there will be issues, ransoms, neighbours with rights – all kinds of reasons why a site hasn’t been sold.”

One creative use of these resources outlined in the report is to prioritise the land for development of residential homes for NHS staff, in discussions with housing associations.

The idea has been championed by Niall Dickson, Chief Executive of the NHS Confederation. In an Observer newspaper interview in June, he urged the government to create a new £10 billion NHS Homes Fund, which would revive the tradition of the health service providing homes for staff to tackle recruitment problems in some areas of the NHS.

Dickson said: “We believe there is a case for new-style homes for NHS staff, particularly where the cost of housing is very high. This leads to staff not wanting to work in these places, because they can’t find proper accommodation, or have to travel long distances.”

A key barrier to trusts doing more with their estate is the lack of incentive, as a NHS Confederation briefing note explains: “The main barriers are the incentives in the system. These do not reward those organisations who are needed to put in the effort and resources to facilitate the unlocking of land for the purpose of building houses.”

To tackle this, Naylor has proposed a ‘two-for-one’ offer idea. He explains: “The question is how do you incentivise trusts to focus their attention on this?

“Every trust in every STP is recommended to come up with a strategy for the utilisation of its estate. If it’s able to do that, then our recommendation is that the government will provide two-for-one funding for any land and assets that they dispose of. So the trust will have twice as much money with which to redevelop its assets and make its services more efficient and effective.”

Guidance on using estates could come from a proposed NHS Property Board.

Naylor believes that Chancellor Philip Hammond has effectively already backed this idea in his spring budget.

He says the government is allocating £325 million to fund capital investments in the most advanced STP footprints, and promised in his forthcoming autumn statement that he would find additional funds – providing trusts were able to identify disposable assets.

Better national guidance on using estates could come from another recommendation contained in the report – the creation of a new NHS Property Board to provide leadership, strategic direction and resource for STPs on these issues.

The government has already made moves towards creating just such a body.

Naylor says there is also interest in a further recommendation in his report – leasing accommodation to staff.

“I am suggesting that we should build that accommodation and lease it to staff during the tenure of their employment. That will encourage staff to stay in employment at the hospital, and with a bit of innovation, you can see how staff could benefit from the increasing value of that property over time,” he explains.

There is enthusiasm for this kind of change from the larger trusts in the south and south-east, as Crofts says: “A lot of the big land-owning trusts are looking at this.

There is also interest elsewhere in the country. Broadly, in areas where property values aren’t that great, the interest is more on collaboration around how organisations can work more effectively together.

“The big question for the system is to what extent should those benefits or the realisation of value be shared, and how should it be shared across a STP area.” 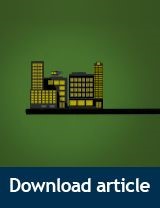