Ben Morrin discusses the staffing challenges he’s faced as Director of Workforce at University College London Hospitals, and what the trust is doing to tackle them.

On becoming Director of Workforce at University College London Hospitals (UCLH) in 2014, Ben Morrin discovered eight beds lying unused in one of the world’s most prestigious hospitals.

“I remember going up to a ward in the National Hospital for Neurology and Neurosurgery as part of my induction, and walking past two bays with four beds each. They were clean and ready. I asked when they were going to be used, and was told there was no prospect of them being opened, as there were insufficient staff.

“Seeing such shortages at ward level, and the consequences for a highly specialised unit providing complex surgery, was quite telling.”

Morrin who has worked at the NHS, Department of Health and Downing Street Delivery Unit, says colleagues across the NHS are suffering in much the same way – trying to redesign services and drive integration against a backdrop of shortages.

These are being caused not least by uncertainty over the continued supply of health workers from mainland Europe and beyond.

UCLH staff fronted the trust’s recruitment ads, and candidates could speak to employees for an authentic view of what it’s like to work for the organisation.

Mulling over the Neurology unit closures, Morrin assembled a group of nurses, HR professionals, communications specialists and unions to share thoughts about tackling vacancy rates of up to 17%.

Firstly, the trust set out to assess where, in national and international markets, it could find high-quality individuals. “For most clinical needs, you have to recruit from abroad due to insufficient supply in the UK,” he said.

With that in mind, proactive marketing initiatives focused on recruiting home-grown staff and workers from Spain, Portugal, Italy, US, Philippines, Australia, New Zealand and the United Arab Emirates.

These countries were selected following a market analysis of potential excess supply, and scope for developing alliances with international academic partners.

Morrin says the trust decided not to use a private sector marketing partner, but to allow staff to think about how to portray and market their roles.

“The quotes about what it feels like to work at UCLH came directly from staff, they were not sanitised or spun. Staff chose the words themselves, and put podcasts on our website about their experiences.

“So they front the way that we advertise, and potential candidates could speak to them for an authentic view of what it is like to work for the organisation.”

Vacancy rates fell to 6.5% over the following 18 months, according to Morrin, and have since levelled out at around seven or eight per cent – although they are “a little higher” in areas such as cancer, neonatal and neurology and neurosurgery.

He says staff appreciated being used as role models in the advertising. “We were delighted with how they responded to, and engaged with, the process.”

Relations with unions and representative groups – such as the BMA, RCN, Royal College of Speech and Language Therapy, Unison and Unite – have also benefited.

“Some people might have thought it risky to involve them in every senior management conversation about the issues we faced,” says Morrin. “But we were being deliberately open about challenging everything the organisation has done and is doing. Having the representative groups around the table to help spark ideas meant they were more involved in the solutions, and have more ownership of them as a result.”

At the other end of the employee journey, the trust also commissioned an independent company to carry out exit interviews, in order to examine what made staff leave.

Nurses revealed that principal aides to retention were the quality of learning on a ward; the quality of line management; and crucially, the cost of travelling to or living close to a trust in the very heart of London.

“A lot of it came down to making the job affordable,” Morrin explains. “However, government wants to react (in terms of the current pay cap), we’re committed to increasing reward wherever we can.

“There’s an obligation on employers to think practically about what they can do in terms of rewards, learning development, or meeting some of the costs of travel or housing.”

Staff-led innovation has led to the creation of a careers clinic, where staff considering leaving can explore the possibilities of redeployment or retraining.

“The facility has been around for a year or so and, so far, some 165 staff have used it. A good proportion would very likely have not stayed if we didn’t have it,” affirms Morrin.

Much is being made of trying to predict where technological advances will add to or reduce NHS workforce pressures. With this in mind, the trust set up the UCLH Future programme to assess where healthcare will be in the next ten to 15 years.

The trust worked with management consultants McKinsey to assess fundamental dimensions of future healthcare, such as how the trust will use digital technology to improve patient outcomes in the care delivery system.

For example, a new coordination centre based in the central UCLH Tower on Euston Road gives clinicians and managers a clearer picture of available beds, facilities and hardware.

“It will allow us to track when a patient needs a bed, when they leave hospital, or where equipment is. Wheelchairs, testing equipment and kit will be tagged, so that they can be found very quickly in a large hospital.

This technology is being tested in Wolverhampton, in Chester and UCLH, and we’re optimistic about how tracking our equipment better will speed up the flow of patients.”

The trust has just signed a ten-year deal with a US electronic patient record company called Epic. The agreement will mean around a third to a half of training capacity investment will have to be refocused in 2018-2020 to prepare for its effective implementation.

Morrin says that organisations that have this system in the US and UK are significantly improving patient outcomes. “Professional experience has been really positive, because Epic allows you to ensure you are focusing on pathways and interventions that are premised on the latest clinical academic practice – encouraging research-intensive care.”

And a common system could also mean better interactions with patients. “At a time of their choosing, patients will be able to pull down their record and communicate with a clinical colleague about their latest hospital experience,” he says.

The trust is also pulling together a comprehensive picture of its workforce demographic: age, gender, home commitments and transport/commute needs. It has one of the youngest workforces in the NHS, and its average age is falling.

Morrin points to a combination of a youthful, female-dominated, potentially transient workforce on one hand, and the rising cost of living on the other. “It’s something that needs careful management,” he says.

“To remain a successful employer in a high-cost city, we need to be very clear about the impact of non-work factors, as well as work factors and individual staff experience.

Morrin highlights the need be flexible in this context.

“We need to be flexible. We need to recognise the responsibilities of staff who are parents and carers, or who might be in training in London, but likely to move away on qualification.

“And we need to be able to predict and respond to the factors that may prompt them to leave. We must be able to spot these before it’s too late.”

He also points out that NHS staff are 50 times more likely to be affected by debilitating illness than the rest of the UK workforce.

“That means that as employers, we need to invest in staff, and in how we support them when things go wrong – either with their health, or in times of challenge.”

Finally, he pauses to consider what makes a good organisation: “It’s about demonstrating compassionate leadership, being mindful, being able to reflect and pause on the judgements we make as leaders that have a clear impact on our staff.

“Organisations that do that are demonstrating compassionate leadership and have the best patient outcomes.”

To discuss the issues raised in this article, please contact Nick Chronias on +44 (0)20 7894 6701 or nchronias@dacbeachcroft.com. 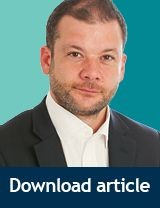