With a NHS career spanning 27 years, including spells at the Department of Health and a senior post in the No. 10 Delivery Unit, Rob Webster comes with a wealth of knowledge and expertise in working across partnerships. So when it was announced that he would be one of the 44 leaders detailed to inject greater urgency into the 44 Sustainability and Transformation Plans (STP) which are proposed to transform health and social care across England, there was talk that the job was all about banging heads together. Something Webster is keen to dispel.

"My authority comes from the collective will of the leaders I work with. I can't tell the trust chief executives what to do in law or even in hierarchy. I don't have that position. What I do is work through this in a way that is a new style of leadership for a 21st-century NHS."

This is clearly a subject he warms to, explaining that research by the NHS Top Leaders Programme found that the NHS leadership was “telling people what to do and telling them where they were going”.

"NHS leadership is all about a network of leaders working collaboratively to deliver a shared goal, which sometimes might not be in the interest of individual organisations, but is within the overall ambition of the place you work. It’s all about breaking down silos and working together across organisational boundaries.

“My approach has been to recognise that and build a consensus around high-level ambition – delivering the best outcomes we can from the Five Year Forward View (5YFV). In doing that, the five principles under which we work give me a touchstone to go back to my colleagues; so if there is a row, I can say 'OK, how does what you are saying fit with our wider ambitions?'."

Webster says this approach is already working in his STP. "We have 11 Clinical Commissioning Groups (CCGs) in West Yorkshire which, although still legally 11, will soon be working as six – and those six will form a joint committee, with an independent chair, which will be able to act across the whole patch. The acute organisations in the STP have created an association, as have the mental health trusts, so there is a lot of change that is about collaboration and how we move forward together. ."

He has also made it clear that the STP is not an entity, but a means to an end. "It does not have a headquarters or its own staff, it is a plan pulled together by a group of organisations."

He says the draft STP came with a compendium listing all the engagements and consultations that had happened since 2012 on a wide range of issues; such as stroke and cancer. "We are trying to be as upfront as possible. The draft plan was built on engagement and consultation and our approach is one that will continue to engage on the detail of what difference this is going to make. This is really important and a priority for us all."

STPs have been creeping into the public consciousness over the past six months with media reports speaking of "secret plans to cut A&E units and beds". This is something Webster is keen to address. While consultations are as open and transparent as possible, and the West Yorkshire and Harrogate STP has spelt out that the health economy faces a shortfall of some £1 billion by 2021, the crunch comes when there is a perception that cherished institutions are threatened.

"There is a constant reminder that we are trying to close three gaps; persistent health inequalities, unwarranted variation in care, but what we usually end up talking about is the third gap – money. It is easier to comprehend how much you have got and what it needs to be spent on – people are grown up enough to understand we need to have that conversation."

The STP is currently engaging people on the future of stroke services. "Health inequalities persist, so poorer people tend to have more strokes and when they have them and are treated, it is also the first time their cardiovascular diseases are picked up. The care available across West Yorkshire and Harrogate is variable in terms of rehabilitation and support post-stroke, so deciding on the best place to send a person is critical. What we are doing is having a conversation in public and with our staff about the best way to organise stroke services. The discussion is about the whole pathway from prevention to recovery, yet the headline becomes 'stroke units under threat'.

“We have an ageing population and the number of people who suffer a stroke is expected to further increase by 2020. If we are to continue to improve people’s quality of life, with the resources we have available, we must change the way in which we deliver stroke services across the area. Doing so will mean that we can make the most of our valuable workforce, modern technology and equipment to further improve stroke outcomes for everyone,” explains Webster.

Webster says there is a lot more to do to iron out the practicalities of integrated working: "At each stage of the development process we have the governance that works for that point in time, but it’s not totally sufficient because the next step will need stronger governance, and we will need to look at things like risk share, and appropriate financial incentives. We also need to look at information governance, HR and how we make the most of our workforce.

Simon Stevens, CEO of NHS England, recently signalled that the move to accountable care organisations (ACOs) would end the purchaser/provider split, but will the final iteration of such organisations require legislation? "Having an ACO doesn’t necessarily mean the end of the purchaser/provider split – it depends on the type. In terms of the Health and Social Care Act, there is probably no chance of primary legislation changing any time soon. This means we will continue with a set of arrangements that are sub-optimal and sometimes feel like 'the biggest workaround in history'."

Webster says that where organisations both commission and provide services across say primary, secondary and social care, the organisation carrying the risk needs to be addressed in governance and contracting models.

"One of the biggest opportunities is to manage risk and reward across a whole system. We currently have a system where taking a risk in one part of the system can lead to a reward in another, but no direct benefit. The classic example is investing in primary care to reduce demand. If it fails, demand into the acute sector rises causing problems in service, potentially unplanned costs, and problems for the commissioner who ends up paying for investment in both primary and secondary care. ACOs could help by managing this across all parties with equal risk and reward, and transitional costs met too."

Webster says each of the six places within WY&H STP are creating their own "flavour" of ACOs - dependant on geography, the number and variety of players involved, and outcomes that are being aspired to.

He says that this truly place-based approach to commissioning and providing services will be helped by the fact that the Care Quality Commission (CQC) is moving from assessing individual organisations to assessing whole health systems.

Webster is all for competition and collaboration, saying this cannot be an "NHS monopoly" – it’s much wider and deeper than that. "We go back to the starting point which, for me, is what is going on in someone's life? We should act as though people are guests in our organisations, that we are guests in their lives. If you look at the people we support, it is the elderly or those who have long-term conditions. What they have in their lives is social care, the third sector, the NHS, their families and carers and some independent sector as well, so these are the people that need to work around them.

He feels the NHS must focus on the root cause of current woes that have led the NHS to be described unfairly as a ‘humanitarian crisis’.

“The root cause of A&E pressures is not A&E, it is delayed discharges and what is going on with older people when they are cared for at home, so that they can remain well as long as possible and not have a crisis and end up in A&E.

“People understand that more and have a focus on it. The STP is about a system response to dealing with those pressures. To make it work we really have to challenge ourselves and what the NHS is.” In doing this he says that the NHS and the public will have much more of a say in design and delivery of service.

STPs are about change, Webster says it is crucial that there is enough money in the Transformation Fund to make the change happen. “At the moment, too much money has to be diverted into organisations struggling with a sustainability gap, so we prop up a system that will never deliver because it is not dealing with the root cause.” 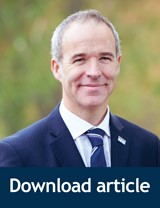 Forward to 2020: The next steps for STPs