A view from DAC Beachcroft

The West of England’s Devolution deal brings access to £1 billion, a new Metro Mayor, greater control over housing, the built environment and infrastructure, transport, adult education and involvement in the design of the National Work & Health Programme. This ability to control regional spend for the region’s benefit is a revolutionary opportunity. Successful management calls for sophisticated, collaborative, joined up thinking from those in power and also greater engagement from and with local people, local councillors and local businesses. The possibilities are very promising; realising the potential will, in reality, be challenging. It’s grown-up government, with all the associated accountability and responsibility.

Respected think-tank Centre for Cities has closely followed the evolution of devolution in this country and internationally. We asked them to consider what qualities will be required of a successful Metro Mayor and what support he or she will need.

What will change for businesses with the new West of England Mayor?

While 2016 was a year of great change in national and international politics, 2017 will see in a revolution in local politics. This May voters across six city regions in England, including the West of England, will go to the ballot box to elect their first directly-elected metro mayor. And by doing this they will turn the tide of decades of centralisation in the UK.

The new metro mayor of the West of England is likely to face very different challenges to his or her new counterparts elsewhere in the country. He or she will govern over one of the strongest parts of the economy outside of London, where residents are more likely to be in a job, and where those jobs are more productive than the national average. Bristol is the economic engine within the city region and Centre for Cities research shows it is the only core city that punches above its weight for productivity, employment and wages. Few other new mayors will be able to boast those credentials.

But this too comes with its challenges – there are costs to economic growth that threaten future prosperity. This is most clearly seen in housing: house prices are 12.5 times local incomes (2016), compared with 10.1 nationally. And this is of great concern to businesses and residents: Centre for Cities polling of firms (2015) and residents (2016) found that both groups expected the metro mayor to be prioritising investment in housing and house building in the first term.

To tackle this, the metro mayor needs to plan for new housing in the highest demand areas, as this will be essential to support future growth in the city and keep prices stable.  Alongside this the mayor will also need to plan strategically for a built environment that allows businesses to expand and locate in the most productive places. Failing to support sufficient development of the right type and location will result in prices continuing to rise which will likely restrict opportunities, quality of life and economic growth in the area.

It is also visible in an increasingly congested transport network: residents in the West of England have long called for road and rail improvements throughout the city region, through organisations such as MetroWest. Similarly to housing, Centre for Cities polling found that both businesses and residents see this as a crucial focus for the new administration.

The metro mayor must capitalise on the opportunity to invest in transport infrastructure. A better-functioning and integrated transport system will enable both workers and goods to move around the city region more efficiently and can improve people’s access to jobs. Failing to address the congested road and rail network around the city region will stifle growth and restrict residents’ access to jobs and services.

In order to tackle these challenges, the metro mayor will be passed a number of powers from Whitehall as part of the devolution deal that the West of England has struck with the Government. The metro mayor will start with powers to set apprenticeship grants and adult skills budgets; for strategic planning and Mayoral Development Corporations; and for bus franchising, smart ticketing and a consolidated transport budget. Previously the majority of these powers lay either with individual local authorities, such as most planning or local transport decisions, or with national decision makers, such as the adult skills budget administered through the Skills Funding Agency.

As well as holding these powers, the metro mayor will have one other key advantage, and that is the wide range of the area covered. Policies designed to improve the economy need to apply over the area that people live and work their lives over. Being directly elected by residents across the three local authorities will give the new mayor this larger decision making overview and mandate that better reflects the way this economy works.

This provides the opportunity to plan for transport and homes across the city region, as part of a range of place-based strategies which include skills and business support. International experiences as well as Transport for London’s Property Partnership Framework show the synergies of planning for housing and transport together to fully capitalise on the opportunities of investment. It should lead to better; more ‘joined up’ decision making between departments across the city region – for example linking the Portishead railway extension with housing development – leading to more efficient use of public funds and better policy making.

Of course, the office and powers themselves present a challenge. Locally the mayor will have to build relationships across the three councils he or she will cover, and the stakeholders within each. Within the West of England city region there are long held political tensions between local authorities. It will therefore be crucial that the mayor builds a strong working relationship with them and make the case for city wide policies and vision – while the policy decisions that the metro mayor will make will be done to strengthen the West of England economy as a whole, they may play out differently across the city region. And policy decisions will often require the consent and support of a number of local authorities to implement the strategy, the leaders of which will hold the metro mayor to account.

This means that choosing when to use their mandate or compromise will be crucial as with only three local authority leaders holding the metro mayor to account (in Greater Manchester for example, the number will be 10) the stability and cohesion of this group will be paramount to its success in getting strategic decisions made. The position will therefore require a candidate with effective diplomatic skills and the ability to provide leadership across the city-region.

The metro mayor must also build the city region’s profile and reputation externally, particularly with government, investors and businesses. Local political observers might envy the attention received by the Northern Powerhouse or the Midlands Engine, but for the West of England the metro mayor can promote the potential boost to the national exchequer of sustaining and building on its considerable successes. Given that the Government has already stated that this round of devolution deals will be followed with more powers, this may put the West of England at the front of the queue for new powers, pilots and opportunities in the coming years.

The role of the metro mayor will be to sustain this thriving economy by supporting the conditions for growth and tackling the costs of growth across the city region. The metro mayor will be at the forefront of a changing relationship between Whitehall and town hall. And this presents a great opportunity to shape the West of England economy of the future. 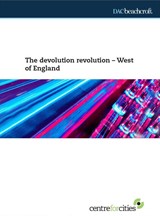