With the statutory Duty of Candour now covering all health and social care providers registered with the Care Quality Commission, just how far will this legislation improve patient and service user relations and reduce the level of formal complaints and litigation?

It is no secret that the management of complaints has come under fire in recent times, with regulators and the public calling for more transparent investigations and responses. Now the Duty of Candour, which came into force for NHS Trusts last November, and for the balance of NHS and independent health and social care providers registered with the CQC in April 2015, means that all providers must tell patients/service users when a ‘notifiable safety incident’ occurs, where that incident has led to specified levels of harm. So how might it impact on complaints?

Concerns that the statutory Duty of Candour apology amounts to an admission of liability in negligence need to be assuaged. In the most serious of cases – specifically where an error is entirely obvious – notification, an apology and an admission may all properly coincide. However, the more frequent cases are those in the moderate harm category, or where the consequence of the incident is less obvious, because providers must take the less satisfactory route for the service user, of apologising for the incident having happened, while often not being in a position to go further in terms of an admission without investigation. As a result, complaints continue to be received, and litigation used as a route to secure answers or compensation. Figures published in August reveal that the NHS in England receives an average of 562 complaints per day. Less than one year in, however, it is too early to demonstrate the (hoped-for) trend of reduced complaints by virtue of increased transparency when incidents arise.

Acute providers are managing this in a variety of ways, for example, Gloucestershire Hospitals NHS Foundation Trust has appointed a senior nurse as a full-time ‘Duty of Candour Co-ordinator’, Jo Hunt, Legal Services/Complex Claims Manager at the Trust, describes the impact of the new position: “The new role ensures that we are identifying and investigating incidents of severe and moderate harm, to deliver improved transparency to the patient involved, plus learning to the organisation and ultimately compliance with the duty.” The Trust holds monthly reviews bringing complaints, claims, inquests and incidents together, to ensure a coordinated and consistent approach to transparency.

But it is not all plain sailing; Hunt recalls how, in this first year of the duty, “we did feel we had a clear handle on candour; however, recent guidance from the CQC around the inclusion of recognised and consented risks and complications has once again broadened the potential triggers, and added some confusion to the clinical staff trying hard to get this right for the patients.” It is clear the interpretation of the duty will continue to evolve, and the management of complaints needs to improve too, but the overriding objective remains – to make it easier to complain and thus deliver improvement.

Yet there is an anomaly in the regulation on candour. The harm threshold which triggers the duty is different for NHS Trusts to the independent health and social care sector and other NHS providers such as GPs, leaving a patient on a clinical pathway involving both public and private services in a different position, depending on which step in the pathway caused the requisite harm. Additionally, the harm threshold for NHS bodies includes incidents that could lead to harm.

Dr Michael Devlin, Head of Professional Standards and Liaison at the Medical Defence Union, says having two thresholds could compromise transparency: “It gets confusing when you understand the threshold for primary care, dentistry and private practice is different to NHS hospitals.”

But once this lack of unity between the thresholds has been addressed, there are many who believe the fully embedded Duty of Candour will ultimately reduce complaints, because full explanations have been given already for relevant incidents. What candour will not address, unless a broader transparency is adopted, is the vast majority of complaints which sit firmly outside ‘notifiable safety incidents’, and this is an issue that only culture, communication and sustainable quality of service will influence. 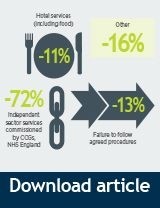