The rise and rise of London's private rented sector

Who are the London tenants of the future?

I asked Centre for London Senior Research Fellow Margarethe Theseira to consider this question, to inform the trends shaping this growing sector. The results of her research draw a picture of residents who are as likely to be from the UK as they are from overseas, who change jobs more frequently than elsewhere in the country, people whose working life is one of temporary contracts, self-employment and flexibility.

It is a pattern of rising demand from a highly mobile population that will welcome higher standards and improved standards of management. The current reality is one of shortage. Getting local authorities building again could be transformative of social housing provision and facilitate development across the rest of the sector.

In early 2015, London’s population is expected to surpass its previous peak of 8.6 million last seen just before the Second World War. The bulk of this growth is from a boom in birth rates and Londoners living longer. Back in 1939, living in private rented accommodation was the norm with 58% of households doing so. In subsequent decades, as people opted for social renting and home ownership, increased regulation reduced the attractiveness of the sector for investors and fewer households rented privately reaching a low of 14% in 1991.

The revival of private renting with particularly rapid growth over the last decade has been spurred by a range of factors including the introduction of buy-to-let mortgages, house prices rising more rapidly than household income and tighter mortgage lending criteria. Today, there are around 3.47 million households in London with the private rented sector accounting for a quarter of this total.

Projections show there will be an additional 416,000 households in London over the next ten years and expectations are that by 2025 some 37% of households will be privately renting. But what factors are contributing to the anticipated rise of the private rented sector? Continued migration, the impact of London’s recent wage decline and the changing nature of London’s employment look set to increase demand for private renting while new entries to the letting agency market and institutions providing homes to rent may make the tenure a more appealing option going forward.

London continues to attract migrants, an important source of demand for private renting, but numbers have been declining over recent years. During the year to June 2013, around 367,000 long-term migrants – that is people who intend to live in the city for a year or longer – arrived in London, but a further 342,000 left London to live elsewhere. Arrivals into London are now more likely to come from within the UK than from overseas: just over a half of the new arrivals came from elsewhere in the UK (54%). 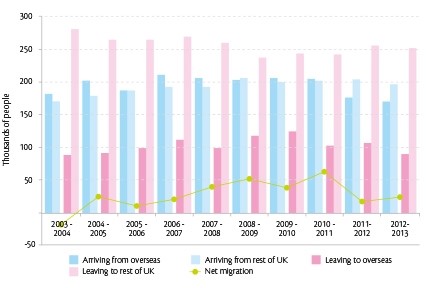 London is also increasingly attracting overseas visitors who wish to live in the city for the short term - between 3 and 12 months – with the number of arrivals rising to around 40,000 during the year to June 2012.

London’s economy has been growing more strongly than the national economy since the country emerged from recession and its prospects continue to look promising with forecasts of further growth of between 3 and 4% over the coming few years.

Businesses too are positive about London’s economic growth. In the recent London Business Survey, half of London businesses expected London’s economy to improve further in the coming year with 63% of them planning to grow. Other indicators that the London economy appears to be thriving are shown by increasing numbers of jobs in the city. There are around 5.6 million jobs in London; nearly a million of these have been created over the last decade and 306,000 in the last 12 months alone. More Londoners are now in work than at any time since 1992 with 72.3% of residents in employment and the unemployment rate has dropped to 6.5%, down from 8.8% a year earlier.

Londoners also change jobs more frequently than people elsewhere in the country: 36% of Londoners have worked for their current employer for less than two years compared with 31% at the national level. Combining these factors means that the demand for private renting, which offers more flexibility in meeting housing need is likely to rise. New entrants to the lettings agency market are also reducing the transaction costs of new tenancies making the option of private renting more attractive still.

The quality of accommodation offered in the private sector has improved over recent years with 82% of London renters satisfied with their accommodation. New players are entering the market which will further improve the experience of renters as they focus on improving the customer experience of renting. The eagerly anticipated offer of institutionally run private rented accommodation is starting to happen in London. The company Molior reports that as of late 2014 London has 101 development schemes containing 12,060 units specifically designed for the rental market. This may be a small addition to the 725,000 units already available to rent in the city but brings an exciting new offer to London’s renters.

London is emerging from a period of wage falls and high inflation, and although the latest inflation data mean that costs may no longer be increasing at such rapid rates, wages are so far showing little signs of increasing at levels sufficient to make up for the stagnant years.

London wages have dropped more than wages at the national level 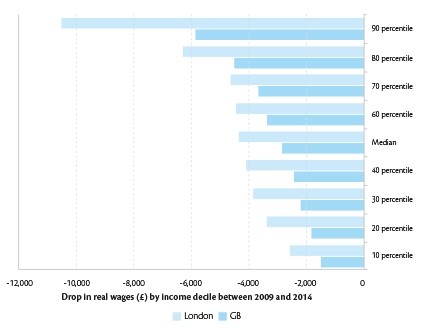 An average first time buyer in London will put down a large deposit of 24% of the purchase costs. They are also likely to be supported in buying their home as 70% of first time buyers in London receive help from others when buying. The reductions and stagnations of wages, coupled with an increase in living costs mean that many people will struggle to have saved money for this level of deposit. Coupled with mortgage lenders more strictly adhering to income multipliers, it is likely that more people will be postponing the purchase of their first home and staying in private rented accommodation for longer.

The indicators are for continued growth in demand for London’s private rented sector and with greater competition entering the market it is likely that the quality of provision will improve too.