It is now seven years since the start of what has proved to be one of the largest recessions ever in the United Kingdom: the fall in national income has been larger and lasted for longer not only compared to the most recent deep recession of 1979-82, but also to the historic recessions of 1890-94 and 1929-33.

Although the recent news is that GDP is growing, the level of GDP is still very disappointing: only 4% higher than in 2008. A figure less commonly reported in the news is GDP per person, which is actually still 1% lower in 2015 than it was in 2008. 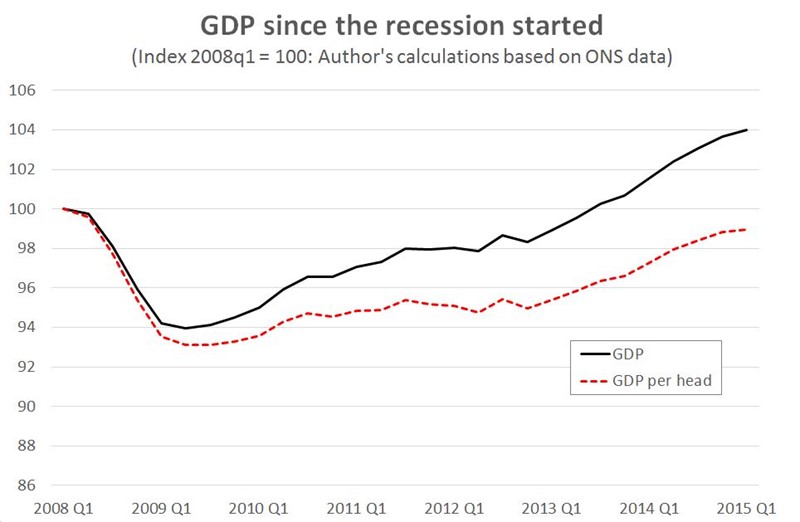 To reconcile these two numbers we need two explanations: partly it is due to immigration from countries in even worse shape than ourselves and partly it is due to very low productivity growth. Current productivity growth in the UK is worse than after any other recession, here or abroad. Although economists have some ideas about why productivity has been so disappointing, the magnitude of the fall has led to it being called the “productivity puzzle”. Unsurprisingly politicians have avoided drawing attention to the fact that they do not know what to do about it either! Not only do we not know what is causing the problem, but there is no sign of it stopping: the two lines in the graph are continuing to get further apart. It is difficult to make credible long-run predictions about growth when we understand so little about the behaviour of productivity.

In the short run, productivity matters less than aggregate demand, which will be driven mainly by the government tax and spending. George Osborne’s U-turn in the 2012 budget slowed down the pace at which the government cut spending to avoid a second recession and it remains to be seen whether the new Conservative government will be able to accelerate cuts in government spending. Many commentators thought that the proposed spending cuts were implausibly high and so it is likely that the cuts will be relatively slow. Constrained from cutting pensions by the voting power of the elderly and having made reckless election promises not to cut big ticket items such as Child Benefit, it is likely that the government will fail to reach its intended cuts to welfare spending, which will be bad for the government deficit but will at least maintain aggregate demand and help the economy to grow.

This all suggests that the economy may continue to grow, albeit at a slower rate than we were used to pre Crash. While disappointing, this is better than the situation in Greece or Spain.

The GC's role in risk management

Recently, working with 'In House Lawyer', we conducted a survey on the role of the GC in managing risk across the organisation.

The Jackson reforms were aimed at increasing the efficiency and reducing the costs of litigation. Since the implementation of the reforms on 1 April 2013, the litigation landscape has changed and in-house counsel who manage litigation at accounting…

A number of recent developments will have an impact on disputes which get as far as formal litigation.  The changes are likely to affect the recoverability of costs and will change behaviours.

Earlier this year, HMRC made a little known amendment to the way in which it taxes compensatory damages, with potentially significant results for both claimants and defendants in professional indemnity actions.