2013 saw the vertical and horizontal extension of the Pre-Action Protocols for Low Value Personal Injury Claims, extending the range of claims included into Employers Liability and Public Liability and increasing the scope of the protocols to claims with a value of up to £25,000.

Whilst the increase in retained claims may in part relate to the type of claims presented, it is reasonable to assume that it also reflects an increase in the expertise of claims handlers and the time available to them to assess liability.

Whilst the number of claims presented has decreased, the average general damages paid on claims settled within the Low Value Protocol has increased in all four areas since 2016, as shown below.  This will stem from a combination of inflation and the resolution of a greater number of higher value claims presented through the Portal, although the rate of inflation of the damages paid has not been dramatic. 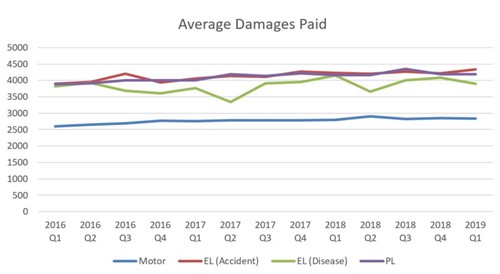 Insofar as Casualty claims are concerned, the increase in the small claims track limit to £2,000 for pain, suffering and loss of amenity will be significantly below the average general damages paid in Employers Liability accident, Employers Liability disease and Public Liability claims falling within the scope of the Portal.  Whilst a proportion of Casualty claims will be caught by the increase in the small claims track, the effect of the forthcoming reforms should not be expected to be significant in the arena of Casualty claims.

Our EL/PL team deal with a number of  Employers Liability and Public Liability cases on a regular basis. For more information or advice, please contact one of our experts.

Counterclaiming for personal injuries? – QOCS protection all the way?

Setting the Personal Injury Discount Rate: The Role of the Government Actuary's Department