Helen Vernon, chief executive of NHS Resolution (formerly the NHS Litigation Authority), tells Adrian O’Dowd of her work to make the organisation more transparent, outward-facing and encouraging an upfront relationship between the NHS and patients when things go wrong.

“Healthcare staff should feel that they can do the right thing and be transparent with patients and not let legal process get in the way,” says Helen Vernon, chief executive of NHS Resolution (formerly the NHS Litigation Authority).

This open, honest view is typical of the woman who, since becoming chief executive of NHS Resolution in December 2014, has been on a mission to make the organisation more transparent and hands-on with the NHS trusts that it assists with patient claims when things go wrong.

The relationship between NHS Resolution – which was set up in 1995 as a special health authority to provide indemnity cover for legal claims against the NHS and to help with risk management – and trusts is clearly one which Vernon wants to nurture.

A law graduate from Cambridge University, Vernon joined NHS Resolution in its early days in 1998 after working in insurance and for the Medical Defence Union.

“NHS Resolution was set up to support the health service and the attraction for me was being able to act in the wider interests of the taxpayer whilst also doing the right thing for injured patients,” says Vernon.

When things go wrong in healthcare, the stakes are high, and NHS Resolution's most recent annual report shows that the NHS paid out more than £1.4 billion to patients and their legal representatives in 2015-16, compared with £1.1 billion the previous year, despite the fact that numbers of new claims fell 4% over the same period.

Vernon explains: “While the number of claims has gone down slightly, it’s not back down to historical levels. We’ve experienced sustained high volumes.”

A peak of claims reached a few years ago was one of the reasons why NHS Resolution had seen increases in payouts now for those historical claims.

Currently, around 2% of cases handled by NHS Resolution end up in court, with the remainder settled out of court or withdrawn by the claimant. NHS Resolution is looking increasingly to innovative ways to resolve claims at the front end in a non-adversarial way.

Mediation is just one approach to dealing with issues that has been promoted by NHS Resolution and piloted to see how much more it can be used. Vernon wants to reduce the need for expensive litigation and to extend support for trusts at an earlier stage to ensure lessons are shared and that patients and clinicians feel able to achieve resolution when something goes wrong.

Under her tenure, NHS Resolution has taken noticeably higher numbers of claims to trial successfully and has strengthened its position on claims fraud at a time of rising claims numbers and changes in the legal market for clinical negligence.

The overall costs of the system are currently under scrutiny and NHS Resolution ran a consultation earlier this year on its main indemnity scheme, the Clinical Negligence Scheme for Trusts (CNST), which set out proposals for the approach for setting the CNST contributions. In addition, it set out some options for the development of the scheme.

“One of the first things we had to tackle was quite a significant increase in the costs of the main indemnity scheme due to the rising numbers and values of claims and I felt it was incumbent on us to explain that,” she says.

Vernon says there has been a positive response to the consultation, and details will be published soon.

“We got a high quality response from the service and some very constructive input. It reinforced the principle that risk pooling is an appropriate way for dealing with clinical negligence liabilities in the NHS and that it is operating effectively.”

Overall, there was support for the scheme and the way in which pricing methodology balances exposure and experience, she adds, saying: “However, there was also support for a number of proposals that we were floating. “For example, the need for us to work more closely with the NHS to manage the very high value cases at a much earlier stage, that is, the additional help that we can provide in areas where there might currently be gaps like understanding and delivering the statutory duty of candour in practice, supporting organisations in learning from their claims, or data analysis.

“There is also support for finding a better way of incentivising trusts to improve their safety record with a recognition that that is very difficult because you need to be looking at how safe an organisation is now, and how likely it is to produce claims in the future that will fall for future payment.”

NHS Resolution provided an incentive scheme in support of the national Sign up to Safety campaign – a drive to provide a platform for the sharing of knowledge, experience and innovation across the NHS – and the authority awarded over £18m of funding to NHS organisations that developed safety improvement initiatives to boost patient safety and reduce litigation claims.

What does Vernon think she has done to change NHS Resolution so far? “In terms of changes I’ve tried to bring, one is recognising the need for us to be more outward facing, more transparent – giving more information to the health service on what is going on in the claims environment.

“We have been more out and about than ever, and working on the ground with trusts.

“We often hear that people don’t like to say anything after an event because they are afraid of litigation, but we wanted to try and dispel some of those misapprehensions.

Our position is that transparency is a good thing: you are more likely to prevent a claim by giving a frank and honest explanation and apology to a patient and engaging with them.”

Educating the wider industry on this position is something that Vernon can see NHS Resolution building on in the future: “There is clearly an appetite for us to do more and the response to the CNST consultation has given some support for that,” she adds. 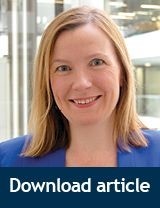