Acclaimed CEO Paul Mears tells Radhika Holmström how working on a small canvas at Yeovil District Hospital has enabled him to develop a Vanguard model of health and social care that best serves local needs.

“You have to start by understanding your local population,” says Paul Mears. “When we started the Vanguard programme, the first thing we did was review all the information about the population to get a good understanding of how they utilised services, and how that worked in terms of costs.” As the Chief Executive at Yeovil District Hospital NHS Foundation Trust, Mears’ local population is relatively small; and this puts him in an ideal position to start developing a model of care that really does get to grip with local needs.

From both economic and social perspectives, merging resources and expertise to focus more effectively on problem-solving – and ultimately, on improving the patient experience – makes complete sense. Indeed, Yeovil’s five-year strategic plan, signed off by Mears in 2014, was already heading down this route even before the hospital and its partners were adopted as one of NHS England’s 50 Vanguards for delivering new models of care. The South Somerset Symphony Programme, as it is known, is working to deliver an Integrated Primary and Acute Care System which brings GPs, hospital consultants, community staff, and social workers into a single team. Mears, who has already had one experience of integrating services in a previous post at Torbay Care Trust, is determined to ensure that the Symphony Vanguard gets behind the rhetoric to make integration a reality.

Numerically, Mears and his colleagues are dealing with comparatively few people. The “top four per cent” of the local population which uses 50 per cent of its health and social care resources comes to around 4,000 patients. In practice, feedback from these 4,000 people has found that what they want is pretty straightforward: they want one point of contact, a central record, and to be able to get help and care at all times.

However, they are not quite the 4,000 people that most people would expect. Initially, everyone assumed that the main focus would be on older people. In fact, a detailed economic analysis of local linked data conducted by the Centre for Health Economics in York found that the main driver to use health and social care services in this area is not age per se, but co-morbidity; a significant proportion of intensive users are in their 20s and 30s, so a model aimed just at older people is not appropriate.

“We needed to identify the top of the ‘care pyramid’,” says Mears. “I think that’s a bit different from the way that the NHS has historically worked, which is more in terms of disease pathways. Those are important, but people can be on several different pathways at once.”

The second step in making an integrated model work, he stresses, is building trust and relationships and in particular, on a relationship with primary care. “GPs are so critical to the health infrastructure – how we work as a hospital is very dependent on GP practices and community services – but it can be quite difficult to engage primary care fully in the redesigned programme so we spent a lot of time building relationships with the local practices.

“You have to put in a lot of effort to build the relationship with primary care, as there isn’t one main body. We established and found some key GPs ready to take on leadership roles in the programme.” It’s not a quick fix: it takes time and hard work, and it requires making the case for the new model especially in terms of the benefits it’ll produce.

Those relationships extend to the private sector as well (and indeed Mears has recruited a couple of key directors who, like him, come from this sector too). The hospital is working with several different private partners, including strategic estates partner Interserve Prime. “There are a lot of people out there with expertise in specific areas that we just don’t have in-house, and often provide a more effective solution than trying to do it ourselves. However, these are partnerships, not transactional arrangements; it’s very much a partnership arrangement where we have an interest in a commercial partner growing its business, and they have one in us as well.”

That is particularly important as the transition to the new care model won’t come cheap, at least initially – the hospital openly projects deficits for the acute trust over the first three to four years. However, the long-term outlook is almost certainly worse without this, which is one prime reason why the hospital was moving towards integration in the first place. Unsurprisingly, commissioning arrangements are also changing at the same time.

“Our CCG is developing an outcomes-based contract for the next financial year. To do what we want to do from a provider side, building new models of care, we need to have a commissioning and contracting arrangement which enables the money to be pooled.

“We’re also aiming for an accountable care organisation, which will hold the contract for the CCG and carry on developing the work we’ve been doing; we’ll have a total population resource available, which means that we’ll have the total amount of money available, and be able to establish where we direct that. We’re incentivising the whole system to work on long-term health improvement goals.”

Moving on and scaling out

So what is the next step for the Symphony? “We’re building on the work we’ve already done; we’re rolling out our care models and working out how the models will impact on the hospital – the number of beds we’ll need, the effects on the outpatient department, working with primary care and so on.”

And does he think that other areas could scale up from the relatively small Yeovil model? “I think the data analysis can be replicated,” says Mears firmly. “Sometimes in the NHS we do go straight for redesigning without the data – the parallel with the private sector is to look at the needs. You go from the data, to segmenting the market, and only then to working on the care models. You have to focus on how you engage with primary care too. And you also have to be able to articulate quite clearly what the benefits are going to be, so that you have a much stronger story with your regulators and your commissioners.” 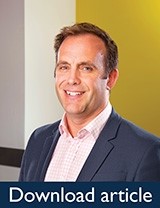 Disability discrimination: Paranoid delusions were not a disability

Worker status: Courier with a limited right of substitution was a worker

Workplace accidents: When does fault arise?

Unfair dismissal: SOSR dismissal of teacher charged with a criminal offence but not prosecuted was fair

Discrimination: The Supreme Court has confirmed that claimants bear the initial burden of proof to establish a prima facie case in discrimination claims.