The appetite of Institutional Investors for private rented units is clearly having an impact on the ground with deals being struck not only in London but throughout the UK’s major cities. Last year an exceptionally high number of rental apartments were being built and across the country, an estimated 30,000 private rental units were granted planning permission. In London alone, the research company Molior, recorded the completion of just over 5,300 private rental units and a further 8,900 under construction in 2015. The private rented sector now accounts for 15% of all private housebuilding in London.

The March 2016 Budget confirmed that the 3% SDLT surcharge will also be applied to large buyers. It is still too early to assess the impact on the potential of the sector. There are early reports of some changes of plan, but there is a need and appetite for this type of accommodation from the market.

Around a quarter of the new units are believed to be directly backed by institutional investment and new investors are coming forward. For example, Legal and General Capital in partnership with Dutch pension fund manager PGGM, have recently launched a £600 million build to rent fund seeking to provide over 3,000 homes across the UK. 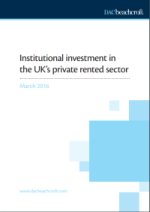