Vanguards to the Rescue - DAC Beachcroft

Vanguards to the Rescue

The new models of care introduced by the NHS Five Year Forward View are being touted as the future of healthcare services – driving integration while sustaining smaller hospitals. With the first wave of Vanguards announced earlier this year, Health Adviser examines their potential and the challenges facing existing organisations.

In January, the NHS invited individual organisations and partnerships of organisations to apply to become ‘Vanguards’ for the NHS New Models of Care Programme. The sites are one of the first steps towards delivering NHS England’s Five Year Forward View.

In July, a second wave of eight was announced which were the urgent and emergency care Vanguards, with a third wave, acute care collaborations, announced in the autumn. The aim of these Vanguards being to link local hospitals together in order to improve clinical and financial viability.

Hamza Drabu, an associate at DAC Beachcroft specialising in Commercial Health, says that struggling providers of health services will have to engage with new models of care, given that models of care relate to health systems rather than individual organisations. Yet he also notes that organisations under siege can lack the time, resources and head space necessary to think strategically.

“In primary care, for example, many GP practices feel under resourced, underpaid and in the throes of a recruitment crisis. For practices in such a position, creating a GP federation to secure contracts to provide services to cover a wider population is often a defensive move, rather than being borne from a strategic vision about becoming an MSCP,” he says.

Saffron Cordery, NHS Providers Director of Policy and Strategy, adds that there is a raft of legal and cultural implications around the creation of both MSCP and PACS. “No one knows yet what the legal implications are and these will have to be dealt with primarily through legislation,” she says.

She also warns of the expectations that are being placed on the Vanguards – “there are too many variables in the system for the Vanguards to be able to overcome all the issues” – and adds that when organisations are expected to be innovative, they should also be given the space for those innovations to take hold. She would like to see significant changes made by organisations to be given two or three years’ grace to allow for improvements – without the pressure of politicians demanding instant results. 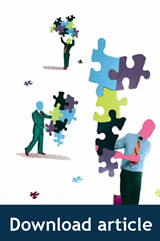 For real life examples on integration in healthcare, visit our Integration Hub.