HMRC's tax avoidance campaign continues apace. The outcome of the general election changes nothing – whilst the Queen's Speech was silent on the issue, the pre-election pledges of the Conservative government indicate that the so-called 'clamp down on tax avoidance' will increase in severity. This article considers the recent developments in this area, and the impact on the profession.

For accountants, and their insurers, the impact of the Finance Act 2014 will continue to be felt. The key change in the Act was a new power allowing HMRC to serve tax demands on investors in a wide variety of tax avoidance schemes. These are known as 'accelerated payment notices' or APNs. The demands require repayment of disputed tax within 90 days, whereas previously HMRC would have had to have won at the tax tribunal (and at any subsequent appeal) before reclaiming the tax (for full details, see our November newsletter here).

HMRC estimated that it would reclaim £7bn of tax over the next few financial years, from 43,000 taxpayers. HMRC's projected tax recoveries are set out in the graph below. 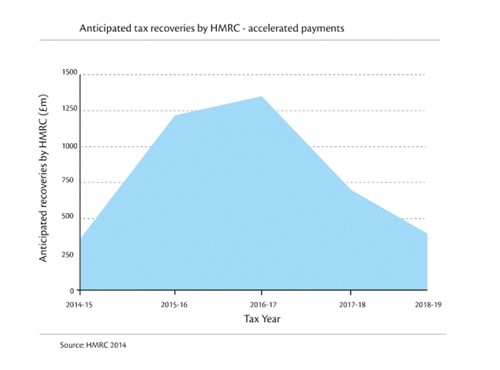 This has now increased to a projected £7.55bn as reported below. Unsurprisingly, there is real concern that this will prompt claims against those that recommended investment in such schemes, or who introduced investors to the schemes. Accountants and financial advisers will be the main targets, although there are bound to be exposures for barristers and solicitors too.

The most pressing development is the likelihood that accountants will not only be facing negligence claims (whether warranted or not) but also increased regulatory pressure. The way accountants are regulated is likely to be affected by HMRC's campaign. In a joint report, Tackling Tax Evasion and Avoidance, published on 19 March 2015, HMRC and the Treasury confirmed that HMRC would be asking the regulatory bodies - inevitably including the ICAEW - to set and enforce clear professional standards concerning the promotion of tax avoidance. The announcement by HMRC included a commitment to increase the referrals to professional bodies, and it is likely that referrals will be made to the ICAEW who will investigate. If a member accountant is found to be in breach of the ICAEW's Code of Ethics, then sanctions could be imposed including hefty fines, reprimands, and exclusion from the profession. This will obviously matter to the accountants concerned, but also to their insurers - whilst they would not expect to provide cover for fines, an indemnity for defence costs in relation to any regulatory investigation will usually be provided.

Other recent developments include:

This will by now be a familiar issue to many. Most accountants we act for have had some involvement in such schemes, and most insurers we speak to face some exposure. Whilst the trickle of notifications has not yet turned into a flood, this is hardly surprising; HMRC originally predicted that 2,500 APNs would be served every month, but our impression is that the implementation of the regime has been slower than predicted. Furthermore, it is inevitable that any claims will lag behind the tax demands somewhat. As is evident from the graph, based on HMRC's own projections, this tax year and the next are likely to be a busy period for HMRC, which has a dedicated team dealing with APNs.

Whether you have any sympathy with them or not, the investors in these schemes are bound to face significant financial hardship this year, which may drive them into the arms of the claimant lawyers and claims management companies seeking to promote claims against professionals.

A workplace that reflects your community - Employment Webinar