In a regular feature, we set out the latest developments in HMRC's campaign against tax avoidance. The Finance Act 2014 made substantial changes to the way in which tax can be reclaimed from investors (see our last newsletter for full details). This was something of a game-changer and made claims against professionals considerably more likely in the medium term.

There is no right of appeal against an APN – or is there?

Whilst HMRC may allow time to pay, ordinarily the investor will ultimately have to pay the disputed tax to HMRC. This does not affect their right to challenge the principle of whether the tax is properly payable at the tax tribunal, but the Exchequer (rather than the investor) will have the cash flow benefit of the sum in dispute until that issue is determined.

However, one group of investors in an Ingenious Media scheme has brought an application for judicial review to test the legality of the APNs. The challenge has been brought on a number of grounds, including the denial of a right to appeal and asserting a consequent breach of the investors' human rights. For the investors participating in this action, the payments due under the APNs have apparently been postponed to the hearing of the judicial review in them summer. The investors' legal team has indicated that it expects the matter to be appealed as far as the Supreme Court. 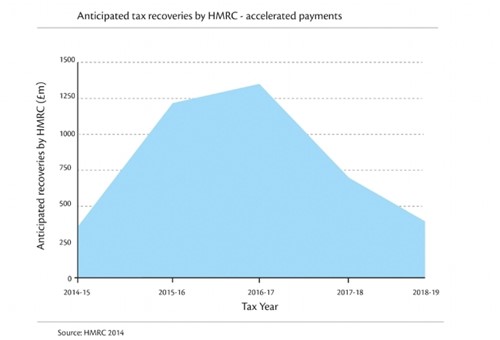 The next two tax years, then, are likely to be the busiest for HMRC and the most painful for investors. The Finance Bill 2015 is expected to introduce further measures which target individuals, controversially including the direct recovery of tax debts from taxpayers' bank accounts or ISAs.

The present focus of APNs is what might now be thought of as 'traditional' type tax avoidance – schemes making use of sideways loss tax relief schemes relating to investment in films, technology and R&D, as well as stamp duty schemes. The measure is intended to 'change the economics' of tax avoidance by avoiding a situation where taxpayers could claim tax relief, and hold on to the benefit of the tax relief for a number of years, until the tax dispute was decided by the courts. Now, HMRC will be able to hold on to the tax during the dispute. Ultimately, what the present government and HMRC seek to achieve is to stamp out what they perceive as contrived schemes seeking to use the tax rules to achieve a result Parliament never intended. The intention appears to be to discourage individuals and companies from entering into such arrangements in the first place. In other words, to make an example of the investors being targeted at present. If that policy works, after the next two years, the risk to investors – and the risk to professional advisers and their insurers – may recede, at least in relation to this aspect of tax avoidance. However, that may not be the end of the story.

Whatever the outcome of the election in May 2015, it appears highly unlikely that any future administration will reduce the resources available to HMRC or the present focus on minimising tax avoidance. There remain a number of other areas which will remain of interest. For example, the Public Accounts Committee (PAC) has recently published its follow-up report in relation to the role of large accountancy firms in assisting multi-national clients to avoid tax. That report concluded that HMRC ought to take urgent action to address the apparent widespread promotion of schemes to corporate clients by which profits would be diverted offshore to avoid the relevant tax. Whilst the media reports focused on the involvement of one 'Big Four' accountancy firm which was involved in such structures, the PAC was clear that its conclusions were "relevant to the tax advisory industry and its clients as a whole". See our article today on the 'Google tax' for the steps the Government is taking to address this issue and the likely impact on professional advisers.

There are continuing media reports about a number of different aspects of the tax avoidance frenzy, and the political parties have kept it firmly on the agenda for the forthcoming election; proposals were made by various members of the coalition government this week to introduce new proposals to bring in financial penalties for financial professionals that assist others to commit tax evasion or are involved in aggressive tax avoidance. The detail of the proposed measures is not yet known.

The UK has a complex tax code. Whilst there are some calls for simplification of the rules, and removal of many reliefs, that largely remains a minority view. Furthermore, the lines between what is sensible tax planning and what is aggressive tax avoidance, and indeed those between tax avoidance and tax evasion, are becoming less distinct. Notwithstanding HMRC's tax avoidance campaign, in these circumstances those that are able to will continue to seek advice from professionals on minimising their tax liabilities. Accountants, financial advisers and their insurers will wish to keep a weather eye on the aspects of tax avoidance which are coming under scrutiny.